About
We've been around a while so we know what it takes to keep you connected. 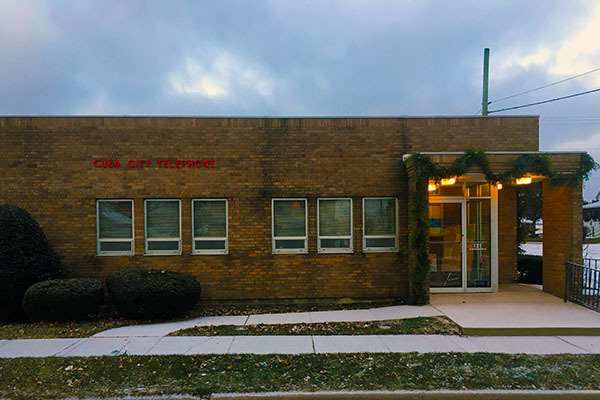 The Company was incorporated May 5, 1913 and that year moved to a building in back of the drugstore with a larger switchboard. In 1924, the Company moved upstairs over the Post Office and a new two-position board was installed. Around 1926, the Company was purchased by the Charles Bartlett family.

At one time there were 21 rural roadside companies in the original area. This included the townships of Elk Grove, New Diggings, Smelser, Benton, Hazel Green and Jamestown. The rural lines were owned by local farmers who were responsible for the upkeep of their lines. This method was very unsatisfactory, as some telephones would be out of order for weeks at a time. It was in 1930 that the rural residents turned over their lines to the Company.

In 1949, the Company moved from the Post Office building to the Cuba City State Bank, installing a common battery switchboard; then in December of 1955, the Company switched to an automatic electric dial system. In 1975, Stromberg Carlson XY central office equipment was installed and a one party service was instituted for the entire service area. The pole lines were replaced with buried cable and a new building was erected to house the business office and central office dial equipment. In 1987 a new Nortel DMS-10 was installed with the assistance of Rural Electrification Administration loan funds.

The Company was sold to Universal Telephone, Inc., in 1965. Twelve years later, in 1977, the Company was purchased by Central Western Communications, Inc. and then sold to LICT, its present owner, in 1991.

In July of 2017, the Company completed the installation of Fiber to the Premise for the entire City of Cuba City.

The Belmont Telephone Company, as it is known today, was organized and acquired the assets and liabilities of the Belmont and Pleasant View Telephone Company, effective October 13, 1951, for the purchase price of $1.00. At the time of acquisition there were a total of 400 company stations, of which 361 were residential and 39 business. Rates for local service at the time were $3.50 for a business line and $2.75 for a residence line.

In 1952, the Company applied for and received a loan from the Rural Electrification Administration for the purpose of rebuilding the outside plant and providing for the installation of a dial switchboard. The conversion to dial service was completed in early 1953. In 1960, through its service by Platteville Telephone Company as a toll center, the subscribers at Belmont were able to direct dial their toll calls to virtually all points in the nation without the assistance of a telephone operator.

The Company showed steady progress and growth through the 1960s until the growth and age of its plant facilities again made it necessary to contemplate a replacement of the central office equipment and pole lines. At a meeting in April, 1973, the Board of Directors again authorized borrowing loan funds from the Rural Electrification Administration to replace all of the existing plant, including a Stromberg-Carlson Step-by-Step XY switch, making possible the conversion of the Belmont exchange to all one-party service. At the time of cutover to the new facility, in December, 1975, pole lines and aerial cable became a thing of the past; and all lines to subscribers, other than in the village, were provided through the use of buried cable.

In 1988 a new Nortel DMS-10 was installed with the assistance of Rural Electrification Administration loan funds.

The Company was acquired by Central Western Communications, Inc. in 1986 and sold to LICT, its present owner, in 1991.